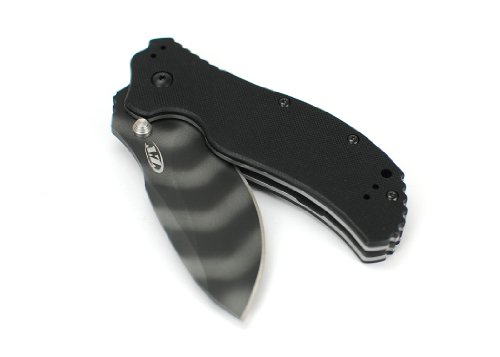 Before we get to the core of understanding these beautiful everyday carry (EDC) knives, let’s imagine a few murky situations.

Say, you are stuck in a situation where getting out of your car would save your life and, you need something to cut off the seatbelt.

Or perhaps, you are stuck in a jungle trail with aggressive wild animals stalking you.

Or say, you caught a huge catfish and, you want to gut it clean (a task in itself!).

And if you have shifted to a new place and, looking at that mountain of cartons to be unpacked, you wonder – how!

In all the above mentioned scenarios, the one stop solution to your quest on how and where to begin the process ends at Zero Tolerance ZT0350TS G10 knife!

Zero Tolerance 0350ts is one of the most sought after tactical and survival knives today. So, let’s take a peek into the features that make it a forerunner in the world of EDC knives!

Zero tolerance 0350 TS is a folding knife that is equipped with a 3.25” blade and a liner lock and, is about .125” thick.Let’s go through the below mentioned salient features that make it a highly sought after tactical and survival knife!

Made from S30V stainless steel coated with tungsten DLC, zero tolerance 0350 TS is all weather durable and resistant to rust. The tungsten DLC (Diamond Like coating) offers three main advantages in using this knife:

A secure grip is ensured!

Zero tolerance 0350 TS also has a textured G-10 handle with a scaled pattern and, is matte black in colour. It weighs about 5.6 to 6.2 ounces and, is about 4.625 inch long when closed and, 7.75 inch when expanded. The scales are made from woven glass fibres which are further filled with epoxy.

The handle provides a secure grip when holding the knife. Besides, the kit comes with a quad mounting system that enables us to carry the knife in all positions be it, left or right handed, point up or down.

The handle of Zero tolerance 0350 TS is about a half inch thick, excluding the pocket clip.

Flawlessly and secure handling with the SpeedSafe!

The unique Tiger Stripe finish on the non serratedblade with a stone washed finish gives Zero tolerance 0350 TS a cutting edge over its contemporaries like ZT 0300 in terms of cutting and piercing adaptability.

Zero tolerance 0350 TS comes with a lifetime manufacturer’s warranty as opposed to any contingencies in workman ship or the materials used in designing the knife.

Besides, Zero tolerance 0350 TS knives come with a 3/8 inched hex head pivot shaft nut that can be adjusted with pliers and wrenches depending on the intensity of cutting and slicing works.

What draws it back despite its indisputably striking features?

How does Zero Tolerance 0350 TS trump its competitors?

What Zero tolerance 0350 TS loses out on its chunkiness factor, it makes it up on the more important aspects that make a durable and a reliable survival knife. As compared to its ZT 0566 and Kershaw lifter, its grip and blade are thicker and sturdier than the others.

Sharpening services for the Zero tolerance 0350 TS knives are done for free, owing to their lifetime warranty on craftsmanship. So, when the blade sharpness starts fading, these knives can be sent to the knife maintenance facilities of Tualatin and Oregon wherein, sharpening is done for free. To sharpen the knife at home one can also use a Kershaw Ultra Tek sharpener.

What we think about recommending Zero tolerance 0350 TS?

Owning an excellent Zero tolerance 0350 TS is one thing. Maintaining is another. However, this knife does not take too much of your time in maintenance. Over a prolonged usage of Zero tolerance 0350 TS, there might be some accumulation of debris on the surface of the blade. This can be washed off with soap and water. However, it is important to dry the knife after wash and, oil it to keep the sharpness intact. Oils like WD40 and gun oil can be used for oiling the knives.

As compared to its predecessors and contemporaries, Zero tolerance 0350 TS comes across as one of the most versatile tactical and survival knives with a raving popularity as the most sought after EDC knife (Every day carry knife). Compact and accommodative anywhere and everywhere, it gives a very clean and a hassle free cut when, dealing with stubborn fabrics and objects.

With a field ready flexibility, Zero tolerance 0350 TS finds its best use in the fields of armed forces, law enforcement, Knife lovers and, even those who are passionate about hiking, mountain climbing and trekking. Although on the higher side of pricing, these knives are definitely worth investing on, especially if one’s work involves cutting activities on a large scale and, on a daily basis.