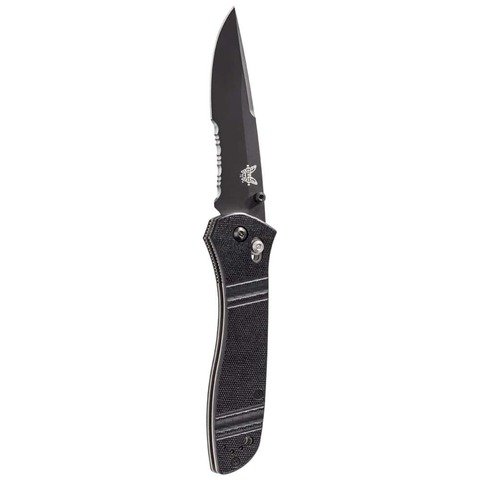 The 710 McHenry & Williams are known by the names of its esteemed designers Bill McHenry and Jason Williams.

Since 1988, Benchmade has been based out of Oregon like other knife manufacturers and have been making one of the best quality knives known to us today.

As a company their focus has always been on world class manufacturing standards. These knives are well known for their excellent quality world over.

They are the ones who actually designed the famous Axis lock and sold it to Benchmade.

And so, Benchmade asked them to design a knife which had this type of lock. This is the reason for McHenry & Williams to have designed the 710, an all time favorite of many. 710 also won the “Knife of the Year” when it first came out in 1999.

It is also not a very small knife either, as it weighs about 4 ½ ounces. It’s close to 4 inches long when opened and on closing it is just less than 5 inches.

One can say that this knife can be operated easily as it has a great combination of craftsmanship and technology. It comes in a small box with a foam liner along with a brief owner’s manual and a draw-string bag.

In this article we’ll be looking at the Benchmade 710 in detail. We will be covering its Benefits, Negative points, Advantages over competition and our Conclusion.

The knife has a fantastic design and look with the right curve. The steel is very hard and so the knife gives a strong feel.  Even though it is not very lightweight, you might feel you can travel with it.

And if you do not have a very deep pocket, you can still carry it.  The 710 has a very durable and classy look and doesn’t look like it is difficult to clean either. One can say it is definitely one of the best knives to carry around.

Model 710 Benchmade design looks simple but there is a lot of work behind it. Its design is extremely intuitive, well thought of and easy to operate. It has the style of a modern tactical knife.

With its beefy phosphor bronze bushings this knife provides low friction to allow the blade to fly out when deployed. With some practice you can use this knife as fast as an automatic.

The bar extends to both sides of the knife over the liners and also over the rear side of the blade. A super-premium knife with an overall fit, finish and a great ergonomics, this model is surely ahead.

The deployment and lock of the 710 McHenry & Williams is excellent due to Axis lock and Benchmade’s stellar quality control.

No one really needs to be told how to open the lock of the knife. The knife has an easy one handed opening and closing due to the AXIS™ lock like butter. You will never get your fingers in the way of the blade. It can even support without any damage a negative weight of 200 pounds plus.

The deployment is aided by low-friction phosphor bronze bushings. You can use either hand to open the blade using the ambidextrous thumb studs positioned on either sides.

The two Omega shaped springs of the lock are excellent and will definitely last long. They are placed on liners and help the knife engage itself with a snap. Even if one stops functioning the other will take care and the knife will work perfectly even then.

The knife has a unique removable, stainless steel pocket-clip located on the bottom end of the knife which is really helpful for the locking purpose. If it was at the other end, the knife would have shown out of the pocket.

With its S90V Premium Stainless Steel blade, the blade size is big enough, rock solid and is great for heavy use. With its thickness of 0.115 inches, the blade still has a light weight, is strong and smooth in action.

The blade has a modified clip point shape with an elegant unsharpened edge and is modified with no serration. And so the blade can come to a fine point, ideal for piercing and thrust cuts. But this blade has a unique soft finish as well.

You may need to sharpen it sometimes but not really often.

The reverse curve Tanto shaped blade is useful for many jobs. It can help in piercing, prying or even opening an envelope. And of course, it is excellent to cut, better than any others.

The shallow sweep and a subtle curve on the edge makes it perfect for thrusting, slicing or coming through.  The grind starting high on the blade is hollow.  One can say that it is a bit too sharp but it provides a smooth and swift action.

The slight recurve on the edge helps draw cuts so easy that the blade can perform like a larger knife.

The handle is made up of carbon fiber scales with stainless steel liners and blue anododized aluminum barrel spacers. Benchmade McHenry and Williams and stainless steel handle with a FRN backspacer. It is durable and dependable. Similar handle may come in different forms for other pocket knives.

But here they almost change appearance as you change the angle which gives it a very cool look. The handle is of 0.41 inches which is thick enough to hold the knife well.

There is a reversible clip for carrying it with the tip up which helps the knife sit low in pocket and helps in enhancing concealment. The handle feels great with its rounded edges and lightly textured scales.
The Axis Lock

AXIS® A patented Benchmade exclusive, AXIS has many fans since its introduction. The lock of this knife is amazingly simple and easy to operate.

It provides a real smooth action combined with durability and strength.  All due to the Axis lock, definitely this blade will not open or close accidentally
Negative Points

We will probably agree that the 710 knife is one of the best available today in terms of its blade, lock and the feel of it. It can be termed as one top-class pocket knife which can qualify for great craftsmanship and good performance.

The 710 is not a very flashy knife and hence it is ideal for sports and outdoor enthusiasts. However, if you intend to buy it as a weapon it may be recommended that you try it out first before purchasing.